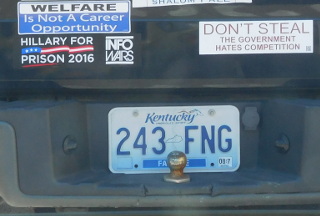 We are still not enamored with Donald Trump, or with any other politician. But we do realize that last night the nation was saved from whatever further treachery Hillary Clinton may have had planned for it. The Clinton crime family needs to be investigated and prosecuted. In fact, If there were any justice in the world, Hillary Clinton's next concession would be given at her upcoming arraignment in federal court.

Furthermore, if Hillary is not indicted for her crimes, then we must know that Donald Trump is complicit in letting her get away with her crimes. There is no way for him to escape soiled hands if she is not indicted.

But it is obvious that in spite of all of her crimes, millions of Whites voted for Hillary. So we have created The White Stupidity Index, which is a rough measure of how likely Whites are in any particular State to vote along with negros and other non-Whites. Of course, the number of Jews may be an underlying factor in some states and we could not take an accurate measure of that.

On another note, if there are no massive post-election negro chimpouts in the cities of America, if Black Lives Matter does not riot and tear up all of their own neighborhoods, then we can be rather certain of one thing: that all along, George Soros and BLM were in direct collaboration with the Obama administration to purposely undermine the rule of law in America.We say this not because there is a chance that Soros is not purposely undermining the rule of law in America, but because the Obama administration has done nothing to stop him from funding purposely disruptive and willfully violent groups.

And as for our purpose here at Christogenea, we need to maintain a message that confronts both White Nationalists as well as politically minded Identity Christians and forces them to remember this moment of perceived victory in the months and years to come. The defeat of Hillary Clinton is only a temporary relief, because yet another political hope will eventually fail to deliver them. There is no political solution to our woes, yet it appears that we will have to learn that lesson the hard way once again. How many times must we go through this before "awakened" Whites REALLY become awakened?